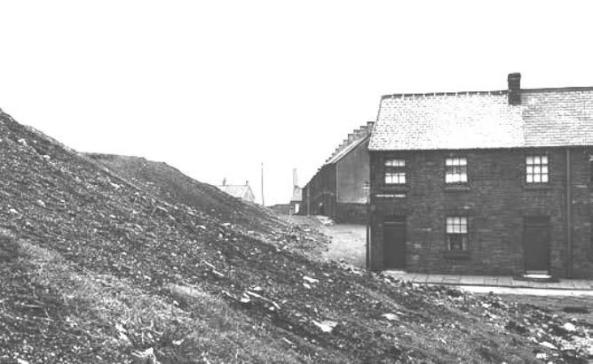 last houses in Aberdyberthdi street in 1963 with Copper slag tip behind on “Tip Row” later renamed to Pentremalwed Road. The tip slite was cleared and a Comprehensive school – Pentre Hafod now occupies the site 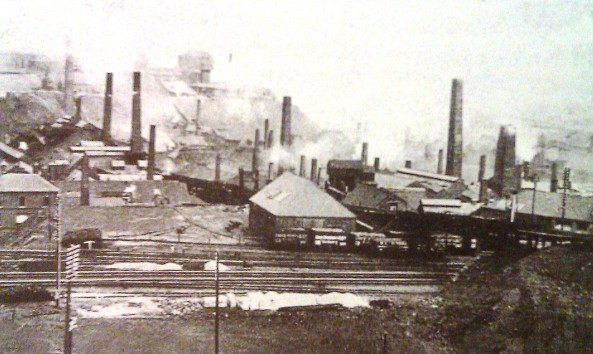 Artist:  Philip James De Loutherbourg (1740‑1812)
A Large Copper-Smelting Works at Swansea (Perhaps the Copper Works at Landore on the River Tawe) Dated 1786 or 1800

The following is a travellers account of Llansamlet Swansea in 1854:

I reached Llan(samlet?); a small village half-way between Swansea and Neath, and without stopping continued my course, walking very fast. I had surmounted a hill, and had nearly descended that side of it which looked towards the east, having on my left, that is to the north, a wooded height, when an extraordinary scene presented itself to my eyes. Somewhat to the south rose immense stacks of chimneys surrounded by grimy diabolical-looking buildings, in the neighbourhood of which were huge heaps of cinders and black rubbish. From the chimneys, notwithstanding it was Sunday, smoke was proceeding in volumes, choking the atmosphere all around. From this pandemonium, at the distance of about a quarter of a mile to the south-west, upon a green meadow, stood, looking darkly grey, a ruin of vast size with window holes, towers, spires, and arches. Between it and the accursed pandemonium, lay a horrid filthy place, part of which was swamp and part pool: the pool black as soot, and the swamp of a disgusting leaden colour. Across this place of filth stretched a tramway leading seemingly from the abominable mansions to the ruin. So strange a scene I had never beheld in nature. Had it been on canvas, with the addition of a number of Diabolical figures, proceeding along the tramway, it might have stood for Sabbath in Hell – devils proceeding to afternoon worship, and would have formed a picture worthy of the powerful but insane painter, Hieronymus Bosch.